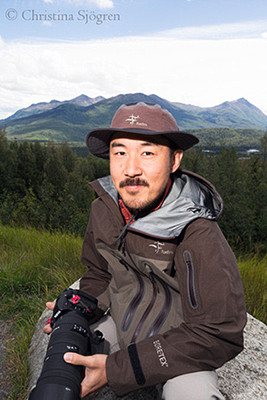 Takeshi Hanatani was born and grew up in the historical city of Kyoto, Japan. While exploring Australia for 9 months in his twenties, he encountered many wild animals that were very rare where he was raised. He realized the beauty of wild animals and his passion discovered to shoot wildlife photographs.

In 1998, after teaching himself photography in Japan, he headed to Canada and spent one year. It was a time for him to search for a direction in his photographs. He drove across the continent from the west coast to the east coast and started capturing wildlife. He then decided to spend the rest of the time in the Canadian Rockies. He discovered that he was becoming attracted by bears and as a result his focus naturally moved further north to the region such as Alaska and the far north of Canada.

In the summer of 2001, he was eventually in the backcountry of Alaska where he had dreamed of visiting for a long time. After that he had exhibitions in Japan couple of times and visited Alaska and Yukon several times. After taking photographs in the far north, he had to return to Japan due to his status as a visitor in other countries. That made him frustrated because his soul was always in the far north and he began to dream of living there someday.

The dream came true in 2007 when he became a permanent resident of Canada. That allows him to stay in Canada as much as he wants. After spending 3 years in the Canadian Rockies once again, he relocated to the place where he had dreamed for a long long time – the Yukon.

He is not only focusing on biology but also capturing wildlife dramatically and poetically in their natural habitat. He tries to express the meaning of life through taking photographs of wildlife which lives in the severe northern environment. He is searching for a way to express that humans live together with nature as a part of the ecosystem of the Earth.

Special thanks to my friend Christina Sjögren, the professional documentary photographer, to take the profile portrait picture.

Please note: Shipping is available only in Canada and the USA through online shopping. Please contact directly via email if you reside elsewhere and would like to purchase our product(s).